You can never have too much of Rabbi Ron!   Today is a repeat of our show together last summer (2019).  Here is his bio:

Rabbi Ron Goldberg was raised in a Jewish family in New York City.  He began sneaking out to church during his senior year of High School. A friend then gave him the "forbidden" New Testament to read and he soon discovered that Yeshua (Jesus) really is the Jewish Messiah. "After coming to faith in Messiah Yeshua my parents thought about having a funeral for me," Ron stated. "Instead, they sent me to a rabbi for deprogramming and intensive counseling!"His relationship with his parents was very difficult for several years but giving them grandchildren helped restore it. Rabbi Goldberg's wife, Vinu and he, are an inter-faith couple with 5 children.

Since 1989 he has served at Messianic Congregations and spoken at churches and Bible studies. "God has called me to raise my voice like a shofar (Isa. 58). I teach about Israel, the Messiah of Israel and the Feasts of Israel (God's Appointments with His children)."

Enjoy the music too!! 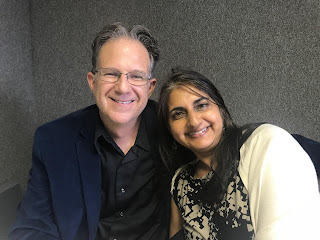 Posted by Ethel Chadwick at 2:24 PM