Yay!  I found another interesting person to interview!   I love hearing everyone's story.  Here is a bio of Jay Axtell.  Hope you enjoy the music and the interview!

"The impetus for my involvement in the Jewish ministry paradigm began at Shady Grove Church in 1992. The son of a preacher and Christian educator, I had been familiar with Paul’s proclamation,
“For I am not ashamed of the Good News, for it is the power of God for salvation to everyone who trusts—to the Jew first and also to the Greek.” Romans 1:16 (TLV)
It was not until I began going to Shady Grove and listening to the teaching of Pastor Olen Griffing, Elder Robert Morris and Dr. Wayne Wilks, Jr. that I began to realize the importance of the connection of the church with Jewish people and Jewish ministry.
After moving away, but visiting Shady Grove in 2009, and learning of Chancellor Jack Hayford’s The King’s Seminary (TKS) in Van Nuys, CA, I took a leap of faith and restarted my journey of education to take a Master of Divinity in Messianic Jewish Studies. The Seminary became a university and moved its main campus to the previous campus of Gateway Church on Southlake Boulevard (TKUG). I was blessed to participate in TKUG’s first graduation in 2015.
I reconnected with Dr. Jeffrey Seif, and becoming his associate pastor at Sar Shalom (Prince of Peace) Messianic Jewish Congregation in 2011, I still felt the push to continue my education at Southwestern Assemblies of God University, which was located three blocks from our house. I counselled with Professor Jon Huntzinger from TKUG on whether I should continue at TKUG for the DMin Messianic Jewish Leadership or go to the newly developed DMin Leadership and Creative Communication at SAGU, he told me a story of one of his professors. Dr. Huntzinger asked him about discerning the will of God. The wise professor told Huntzinger, “Often, when seeking the will of God, one has to look no further than the back yard.” I knew he was encouraging me to go to SAGU. Dr. Seif encouraged the same. My DMin project, however, is called, SALVIFIC OUTREACH TO JEWISH PEOPLE: STRATEGIES FOR PRESENTING JESUS AS MESSIAH AND SAVIOR. I believe ministerial credibility in both Messianic Jewish and Christian camps is helpful. My doctoral project was signed Tuesday October 27, 2020 and I graduate in December 2020. May all Israel see perfectly in 2020!" 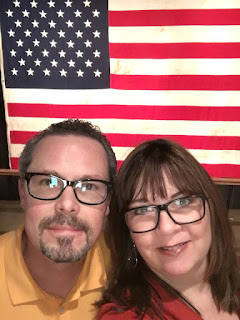 Posted by Ethel Chadwick at 1:16 PM