Who knew that the word "Bagel" would connect me with these two adorable believers from Israel!

This adorable couple shared their story of faith and you will hear some of their music too.

Michael-David: Inventor of the Harpella TM and President of Harptronics Inc.

Michael-David is the author of a new book "The Frequency of the Supernatural". He is an inventor, composer/producer, prophetic harpist/psalmist and Renaissance man. With a lifelong passion for technology, astronomy, and quantum physics, he merges these fields with a love of music and God. His patented electronic harp called the Harpella has taken him around the world in prophetic harp music.

Michael-David, is a Psalmist who leads worship and holds harp schools internationally. He has a calling to help restore the harp as a prominent instrument for worship and prayer. He is the founder of the School of the Prophetic Harp and has given instruction in Davidic Psalmistry in Israel, North America and around the world.

Michael-David and his wife Zsiporah are a Messianic couple who have ministered in music for over 30 years with a distinct Hebraic emphasis. They have appeared on Canada’s #1 daily Christian TV program 100 Huntley Street on a number of occasions and in Israel at the ICEJ Feast of Tabernacles before thousands of international visitors and delegates as well as ministering at the All Nations Convocation with the Jerusalem House of Prayer For All Nations for multiple years.As a harpist, composer, and producer, Michael, along with his wife, who is an author and singer, have produced original musicals including The Feast of the Ages (available on DVD) and A Camelot Christmas Tale that has aired across North America. They are also credited as Executive Producers for a number of feature-length films in conjunction with CubeCity Entertainment. 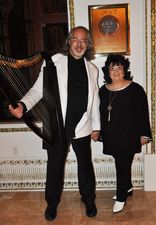