What a fun interview with Kenneth Berg!  Kenneth has traveled extensively throughout the Holy Land and the Middle East for over three decades producing award-winning television programs based on the Bible.

Ken was raised as a minister’s son in New York City. After serving in the motion picture division of the US Army, he moved to California, where he worked in Hollywood for a Christian advertising agency.

His is the founder of Berg Productions, Inc. which produces such programs as “Zola Levitt Presents” and “The Nazareth Jesus Knew,” which can be seen on one or more of the national Christian networks.

Kenneth has been to Israel 73 times. 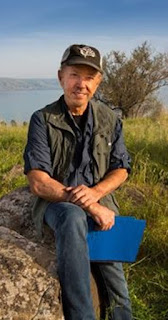 Posted by Ethel Chadwick at 1:04 PM