Today's show was not only focused on Sukkot and wonderful music from Steve McConnell, Sue Samuel, Ted Pearce, Nancy Santiago, Marty Goetz and Paul Wilbur, but I had a lovely time chatting with Ed and Amanita Marvin!

Ed and Amanita Marvin are leaders of Shoresh David Messianic Synagogue in Wesley Chapel, Florida. They have been involved in Jewish ministries for many years. They have eight kids and five grandkids. They have a heart for Jews and non Jews to know the Messiah Yeshua and become His disciples.

Ed is a graduate of Columbia Bible College, currently called Columbia International University. He served with Slavic Gospel Association among Soviet Jewish immigrants in Chicago for four years in the 1980’s and then bringing the gospel to the former Soviet Union while based in Finland. In Finland he founded Shorashim Fellowship.
Amanita is a lawyer and a native of Finland. She was involved with several Israel Friendship organizations in Finland and studied at the Hebrew University of Jerusalem. Rabbi Ed and Rebbetzin Amanita have been in ministry in Florida since 2013. 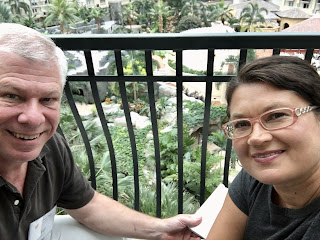 Posted by Ethel Chadwick at 3:47 PM