Doug was born in the Bronx, New York City to a newly immigrated Israeli man (Sephardic) and an American Jewish woman (Ashkenazi). They attended a Conservative temple in New York City and Doug attended Hebrew School there for several years preparing for his Bar-Mitzvah.

Doug graduated from SUNY Stony Brook (State University of New York) in 1985 at the age of 21. In May of 1986, he was up in the late hours of the evening watching television  when he heard a slight rumbling sound outside, possibly coming from the sky.  He heard it again, and then suddenly a thought crossed his mind – literally for only a few seconds – but it changed his life and eternity…. “This is it” he thought, “The Christians are right! JESUS IS COMING BACK and it’s tonight!!” For a few seconds, his eyes were riveted to the sky as he waited for horses to appear in the sky and for this Jesus to return as he knew the Christians said he would do one day.

Doug began to think about forgiveness and to have thoughts about God.  Eventually he called a Messianic ministry and after attending a Messianic service he gave his heart to the Lord.  Today he is on staff with Rock of Israel Ministries where he sets up booths all over the world proclaiming that Yeshua made him kosher. 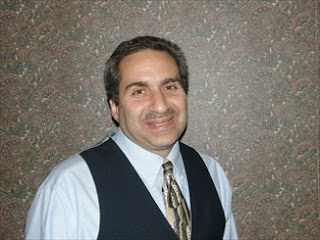 Posted by Ethel Chadwick at 5:59 AM